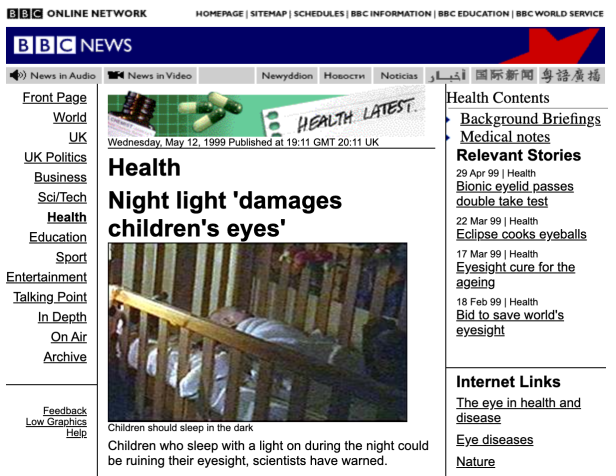 The article states that Children should sleep in the dark and supports this advice by stating that Children who sleep with a light on during the night could be ruining their eyesight. To identify the type of argument, we follow the instructions in the Argument Type Identification Procedure (ATIP).

The procedure starts with an analysis of the statements functioning as the conclusion and the premise, followed by a number of transformations of the original text so as to represent the argument in the standard order [conclusion, because premise]. This yields the following result:

The next step of the procedure is to determine the ‘argument form’, which is defined as the specific configuration of the subjects and predicates. The present example fits the form “a is X, because a is Y“, which means it should be labelled as a first-order predicate argument (abbreviated as ‘1 pre’).

Now that the analyst has determined the basic characteristics of the argument, they can be summarized by providing its systematic name, which combines the relevant labels for the argument form and the argument substance. In this case, we are dealing with a first-order predicate argument that combines a statement of policy with a statement of fact. Its systematic name, in abbreviated form, is thus ‘1 pre PF’. In the visualization of the Periodic Table of Arguments, such arguments are situated in the PF column of the Alpha Quadrant.

The systematic name provides the analyst with information about the so-called ‘lever’ of the argument, which is a formulation of its underlying mechanism (see Wagemans 2019). In this case, the systematic name tells us that the argument is based on the relationship between the predicates Y and X. Since a fitting keyword for describing this relationship is ‘pragmatic’, the lever can be formulated as:

prevents them from ruining their eyesight (Y) IS A PRAGMATIC REASON FOR should be done by children (X).

The keyword connects the systematic framework of the Periodic Table of Arguments to the names of argument types as they can be found in the traditional dialectical and rhetorical categorizations of arguments. To reflect this tradition, every systematic argument type that is distinguished in the table hosts an arbitrary number of so-called ‘isotopes’, which are named after the keyword that describes the underlying mechanism of the argument. In this case, the isotope name is ‘pragmatic argument’ (represented in the table by the symbol ‘Pr’). 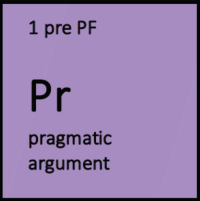 Why missing premises can be missed (Wagemans, forthcoming)

Analogy, similarity, and the Periodic Table of Arguments (Wagemans, 2018)

Assertoric syllogistic and the Periodic Table of Arguments (Wagemans, 2017)