The Periodic Table of Arguments considers an argument as a combination of one conclusion and one premise, both of which are expressed through statements that contain a subject and a predicate. Depending on the constellation of these subjects and predicates, an argument takes one of four possible argument forms (see Wagemans, 2019). Arguments that share the same form are situated in the same quadrant of the table.

The Alpha Quadrant pictured above hosts all so-called ‘first-order predicate arguments’. The conclusion and premise of such arguments have the same subject (a) and different predicates (X and Y), giving them the form: 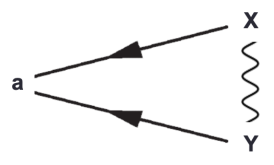 In the case of the above example, the lever is the relationship between left a long trace of rubber on the road and was driving fast. Since the former is taken to be an effect of the latter, this argument can be called an argument from effect.

Other examples of arguments within this quadrant are:

the argument from criterion, which combines a statement value (V) with a statement of fact (F)

Analogy, similarity, and the Periodic Table of Arguments (Wagemans, 2018)

Assertoric syllogistic and the Periodic Table of Arguments (Wagemans, 2017)